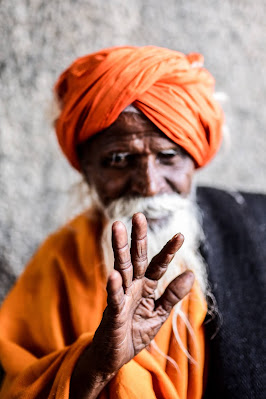 davide ragusa on Unsplash
“You are going to be a Guru one day, like a Satguru or something.”  told one of my colleagues in the room.  The other person in the meeting room smirked.  I knew what he thinks about it.  He has a lowly opinion of all Gurus.  I hoped he doesn’t have such a low opinion about me.  If I really become a Guru, he might consider that I have fallen from my values.  But why would a normal person lose respect when he becomes a master, revered by the masses.  I can dismiss it, as just envy.  Or it could be a sense of superiority over the lowly masses that respect a Guru more than anyone else.  The masses have no idea of the philosophies, the ways of worship, the mantras that a learned man like him knows.  And they go after an ordinary man like him!  That might translate to be the irreverence.  I don’t know.

I thought I should check my master about it.  At least I would come to know what it means to be a Guru.  Here goes my imaginary conversation.

"Hello, Master.  Are you aware of the opinions of people like my friend?  You have amassed so much wealth; you travel in a charter plane; you give a lot of dumb answers to dumber questions your followers pose.  What do you have to say about all these?"

"Oh, your friend has an opinion, like he has a shirt.  He can keep his shirt; you can keep yours.   I have nothing to give and take in this deal.  Let me try to answer the other questions, maybe you and your friend will change your shirts.

Whatever wealth that you see as the ones I have amassed are just on paper.   I’ll explain the pains of running an organization like this Aashram later.  I do not have even a hundred rupees in my pocket.  Does it make me rich or poor?  Well, I can get whatever I want.  But do you know that my wants are a lot less than yours?  I occupy a space just as much as you do.  I eat even less than what you eat.  Have you ever had food in this Aashram?  What do you think of it?”

“See, the food isn’t great; that’s a motivation for me to eat less.  At times, the rice I take often has small stones in it.  I’d take it as my “Karma” and get on with it.

The clothes I wear aren’t as expensive as yours.  No Guccis and Raybans for me.  The ones I wear are gifted to me by my followers.  I end up wearing ill-fitting clothes.  It doesn’t matter to me.  We have talked about shelter, food, and clothes - Roti, Kapda Aur Makaan are addressed.  What next?  My wealth on paper?

I have to create an organization to manage all these.  Employee a few hundred people, take care of a few more hundred volunteers, provide shelter to people who come to see me, ensure that they are safe and comfortable, crowds are managed, provide food and water, etc.  We do need so much land and buildings to support all these.

When I felt I got something to offer as wisdom, I started small, in a remote village.  I lived in a hut, meditated there in the middle of mosquitoes, other insects, rats, and snakes.  It was humid too.  Had I continued there, I would have been known to a few hundred people; maybe about 10-20 would have joined me as my disciples.

I remember a kid in one of those classes who was sleepy all the time.  Poor guy had seen rats and snakes and stayed awake all night and was sleeping during my lectures.  I am glad I can offer a better environment in which they don’t have to be scared of rats and snakes.

Now with all these comforts, we are able to accommodate hundreds of thousands of people.  Now tell me, who is enjoying the wealth “I have amassed”?

For this amassed wealth, we have to pay taxes - like any business does.  We are not a “charitable institution” that takes from the wealthy and give it to the poor.  Our mission is different - we don’t do charity and convert people to follow me.  Get it?   By not fitting in with the government’s classification of charitable institutions, we end up paying taxes.  That means, we need to behave like a business to save on taxes.  My charted accountants do need work.

On charter planes,  do you think it is fun to travel by air these days?  You are badly mistaken.

Let me come to the dumb answers to dumber questions.

For some reason, people think that miracles are needed for their worldly problems.  The problems that they have can be divided into real and perceived problems.  I think humans are capable of handling real problems.  They don’t know how to handle the perceived problems.  That’s why they come to me.  My dumb answers should give them a slightly different perspective of the problem so that they address it themselves.  If I ask a person to try something different, change his habitual way of thinking.   My sincere wish is, he learns to coexist with hundreds of people from different backgrounds, interact with them and someone out there would have the solution on hand.  You must have noticed that my dumb answers aren’t divisive or cause hatred.  I, on behalf of all the Gurus out there in India, would like to take credit for that.  We don't preach hatred towards others nor do we issue Fatwas.  We try to unite, not divide.

I do feel terrible when young men and women come to me seeking miracles when they are capable of performing it themselves.”

He paused.  I resumed.

“How do you explain the violations - moral, ethical. legal ones by you?”

“On the worldly level, yes, there could be violations.  Please note that the moral, ethical, and legal codes are limited by time and space.  Any rule that you quote now, I can quote a totally opposite one from a different time and space.  These codes are there for society and any violation is treated as a violation and criticized, to prevent a repeat of it and maintain some level of sanity in the society.

Let me take them one by one - I hope people don’t look for moral instructions when they come to a Guru.  If they need moral instructions, they have to go back to school in which there is a designated teacher to teach it.  And I do not think someone can teach morals better than ones’ parents - be it good or bad.  A modern Guru is one who helps you make sense of your positive and negative emotions and deal with them.  People need help to cope with their anxiety, fear, uncertainty, and even fame.  Also, most of the negative emotions are due to the conflicts arising out of taught morals.  A Guru may have his own morals to stick to.  If he doesn't, it is his problem.

Ethical violations are personal.  It is for the individuals to deal with; society has no bearing on them.

On legal violations, that’s a side effect of an organization.  As much as don’t want to quote the Jewish shepherd, I end up using his - let a person belonging to an organization that is totally clean on the legal front accuse.  The point is not to paint everyone black, but just to state that it is highly impossible to be 100% compliant with legalities.  Illegality is as natural as lawyers and charted accountants.  Like most heads of organizations, the Guru is accountable for such violations and he would deal with it like the head of any organization.

The challenge for a follower is to get over his mental blocks on these to identify his own Guru.”

Before signing off, I asked him. “Do you think I will be a Guru one day as this person predicted?"

“That would be a dumb question.  Allow me to give a relatively smart answer.  It depends on the student you get.  It needs a student to identify his master.  If you are getting a good student, you may become a good teacher.  There’s nothing anyone can do about it”


BTW - with the kind of people you keep company with, I doubt whether you will get a student at all!  So, relax. Don’t lose your sleep on living my kind of life."
at October 28, 2016

I happened to find your blog while i was reading jeyamohan's articles on Jaggi vasudev.
It was amazing. You have reflected everything clearly.

Read it twice. keep writing articles like these.
Thanks.